Looking back at my track record, my first trimester pregnancies were either a hit or miss. With my first pregnancy, I came to discover I could NOT eat bananas during my first trimester. I LOVE bananas, and I couldn’t even eat them if they were mixed into something else. Nope, not having it.

Come to think of it, my oldest isn’t too fond of bananas.

For my second and third pregnancies, things went fairly smoothly during the first trimester.

This pregnancy was by far the most harrowing.

This go around, I was nauseous without any vomiting and was mainly horizontal for a majority of the first trimester. As soon as I ate something, it would immediately make me feel sick to my stomach, but nothing would come up. It was pure torture.

We were having a girl.

I was tired more than usual, and although I was taking my prenatal vitamins, I could only take them at night because during the day, I was so nauseous and once again in the horizontal position.

We were having a girl.

All the activities I was used to doing came to a screeching halt for a few weeks as my body adjusted to this life growing inside of me. My FitBit obsession was compromised as well (not too happy about that one.) I was also limited in what I could do with the boys because I was so sick. Add to the mix hubby was working in Alberta and gone for most of the first trimester.

This was DEFINITELY a girl.

They say all pregnancies are different and there’s no way of predicting whether you’ll have a boy or girl, but we knew. EVERYTHING about this pregnancy SCREAMED DRAMA!!! The conception, the first trimester, it was non-stop DRAMA!!!

Then, I had additional testing because of my age. I’m not a fan of the term used for women over 35 who are pregnant; it just sounds so…UGH. I mean, really?!?!?! Yes, we’re older, but we’re not completely washed up or used goods, for crying out loud.

I was paired up with a great OB/GYN and my first visit went well. She asked the standard question – date of my last menstrual period, any other pregnancies, miscarriages, etc. Measurements were taken, urine sample, all the fun stuff that happens during a prenatal visit. And then the doppler came out. I think a little piece of me was still convinced that maybe this was all a fluke of sorts – maybe it was just really bad gas and I needed to let out a huge burp or fart.

After some poking around trying to find the fetus, there was the distinct sound of a heartbeat.

Well, there was no mistaking that sound. I was having a baby!!!

There were some concerns, however. Because I had 3 c-sections, my uterus was a little higher than normal and doing the cervical exam was quite interesting, but a success.  There was quite a bit of scar tissue, which resulted in my uterus being so high, and there was no question that this would be another section birth. There was the possibility that during delivery, I could have complications and I appreciated the fact that she was so forthcoming in the beginning. That way, we could go in prepared with this information, should there be any problems.

I asked about my active lifestyle and if I could continue. It was encouraged, but to take things in moderation, especially since things were so difficult during the first trimester. I decided to put my running on hold, and would continue my workouts at home, following the modified routines.

We hit the 12-week mark on October 6th. Bloodwork was scheduled to make sure my levels were okay and to check for any possible risks of birth defects.  That day, hubby and I had an appointment at the IWK Children’s Hospital in Halifax for an ultrasound. Since it was still too early, we wouldn’t be able to find out the sex of the baby, only meet him/her for the first time. We were kinda bummed about it; I mean, we just wanted to know so we could be ready. We arrived, got registered and waited our turn.

Then came the ultrasound. 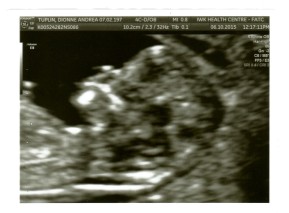 I gotta admit, I was still a little in denial. A little part of me was still convinced it could have been really, really, REALLY bad gas. Then we saw the image on the screen. There was no mistaking that visual. We were having a baby. Of course hubby, the impatient one, was trying to decode what we were having. As the technician got to the privates area, he says, “That looks like it could be a girl.” The technician then says, “I can’t say that I disagree with you.” So, unofficially, we got confirmation we were having a girl, but would not be certain until the 20-week ultrasound.

So, I had my confirmation and we survived the first trimester without any complications, other than my crazy nausea and fatigue. Now that we had the official word of being pregnant, we could start sharing. More important, the boys could finally let the cat out of the bag (which I came to find out later they told some of their friends, but SWORE them to secrecy.) Since my boys have always been involved with the pregnancies since Day One, I wanted a cool way for THEM to make the announcement. I decided on a video and they were more than willing to participate.

The fact that the boys were over the moon excited to have another baby in the house helped to put my mind at ease. Yeah, this meant one more mouth to feed, the return of dirty diapers, lack of sleep, making adjustments in our lives and basically starting all over again. Seeing the look on their faces and how excited they were about being big brothers (especially my youngest), made it all worth it.

I am now a Mom of 4. I honestly didn’t think I would ever say (or type) those words, but, this is my new reality.

I should start at the beginning. 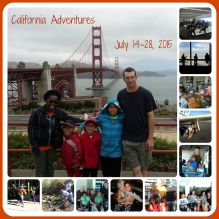 It was August 2015 when my life (okay our family’s life) changed forever. In July, we took our first family vacation to California and was there for 2 weeks. It was a lot of fun for all of us and we spent time with family. When we got back, things seemed a little different. I felt different.

August 14th came and no cycle. I grew concerned. The next day, nothing. Three days later – nothing. Then, I was a week late.

I was not happy.

On August 21st, I sat down with hubby and said, “I’m late. I’m not happy. Get a pregnancy test, even though I already know the outcome.”

There were 2 lines. The second line was faint, but it was a line, nonetheless.

Hubby, my oldest and I saw the stick. Hubby was in denial; my oldest was excited. We called the 2 youngest boys in to look at the stick. “Boys, what do you see?” “2 pink lines!!!”

I turned 40 in February; all 3 boys were in school; I was FINALLY at a stage in my life where I could start focusing on me, start having some one on one time with hubby, expanding my business and just breathing again.

I got PISSED again!!!

I had plans. I was done at three. All my life, I said I was going to have 3 kids. Granted, I said they would be two boys and a girl, but it didn’t happen that way, and I was fine. We were fine. When my youngest started Kindergarten in 2014, we cleaned house of everything baby – no crib, change table, baby clothes, etc. We thought we were done – at least I thought I was. We had a rhythm going. Things were good. Heck, I started running earlier in the year, ran a 10K in June and was planning to run a half-marathon in October.

So much for that happening.

Don’t get me wrong, I’m not a bitter person and I love being a Mom. I simply thought we were good as we were. It was 6 years since we had a baby in the house. We were starting all over again.

Was I ready to do this again?  Was I up for the task? Would I have the stamina and patience for another baby at my age? Would there be any risks?

I got PISSED again!!!

All these emotions and questions happened in a matter of 5 minutes, if you can believe that!!! I did decide that I was going to keep this very quiet, only immediate family was going to know initially. I was mainly concerned because of my age and the increased risks, so, if we got through the first trimester without any problems, then, we could tell the world. I said this to the kids as well. With school starting back a week later, I asked them to keep this information to themselves and wait until I hit the 12-week mark.

We also didn’t have a family doctor, and for about 3 weeks, I was on the phone practically every day with the Family Registry, leaving messages to inquire about a Family Doctor. If I’m gonna bring a new life in this world, I darn well better have a physician. The nagging must have worked because I was paired up with a great OB/GYN who helped put my mind at ease during my new journey.

All I kept thinking in my head was, “Here we go again!!!”